Inspiring People to Use Their Gifts for Global Impact

Life is busy.  We all know that quite well.  Our calendars tend to fill up before the month has even begun!  What’s interesting, though, is that the things we need most tend to be left off the “to do list” and the calendar.  Running from activity to activity and event to event is all wonderful until we get burned out!

What I’ve come to realize as I reflect on 2013, and as the winter storms of 2014 snow me in, is that sometimes what we need the most is rest.  Since we often don’t choose rest for ourselves, I have found that God sometimes takes the steering wheel and MAKES us sit down and rest.  Those experiences can be pleasant or painful.  Recently a friend of mine slipped and fell on some ice, breaking her leg.  This happened right before Christmas and she had so much to get done before the holiday.  That was a prime example of UNPLEASANT forced rest.  I recently experienced a more pleasant “sit down and rest” command from God.  Many of you have experienced this with me in the last week!  His blessing in disguise was the lovely BLIZZARD and ARCTIC BLAST we are having!! 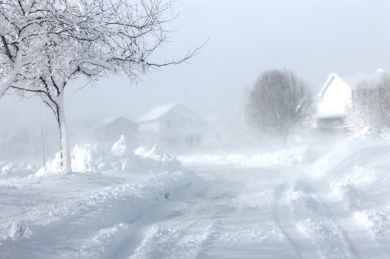 I believe God has truly snowed me in on purpose.  He’s saying “Sit with me.  Relax with me.  Enjoy the view.  Hear the sound of the quiet peace that has settled over your world.”  There’s nothing like the sound of the morning after a snow storm.  If you stand outside and just listen, it is so quiet and peaceful … I love it!  However, with the temperatures we are having, you can’t stand outside for long before you find yourself with a frostbitten nose and fingers!

God is granting us these moments because he wants to remind us that in the quietness and peace, and in the place of rest, is where you hear him the most.  It’s the place where his voice is clearer than ever.  It’s beautiful and it’s reassuring.  He’s with me.  He knows what I need more than I know what I need.  He knows my human tendencies to rush and stress and worry.  He knows I need rest.  Even when I don’t realize I need it, he does, and he MAKES me rest.  I know it sounds a bit forceful, but I’m thankful that he knows what he’s doing.

So, in all the hustle and bustle of life, take a moment today and ask yourself “What has God done in my life lately to force me to rest?  Has he had to force me, or have I chosen rest on my own?”  I think either way, rest is necessary.  I think our best bet is to choose it for ourselves, make room for REST in our day, schedule it on the calendar so we don’t forget!  We need to do what’s necessary to get those quiet moments with Him.  Otherwise life tends to wear us down to a point where we are forced to rest because of unpleasant circumstances … illness, overload, etc.  Don’t let those be the reasons you rest.  Don’t put God in a place where He has to force you to relax with him in peace and quiet.  Choose it for yourself.  Make time for it.  You need it, and those around you will appreciate the fact that you chose rest.  We all know we’re much more pleasant and loving and giving and much more of a blessing when we are not running on empty.

So, fill up today.  Rest today with Him.  He’s longing to spend time with you, and you might find that the snowstorms of life are your perfect excuse to get what you need most.

Have you ever made it to the end of a thing?  Have you ever prepared for an event, trained for a race, poured your heart and soul into a moment, and then it was over?

The end of a thing can be a positive or negative experience.   It can cause you to feel a plethora of emotions.  The end can bring joy or pain, extreme relief or extreme sadness, a feeling of the highest high or the lowest low.  Sometimes the end of a thing does both.  You experience both ends of the emotional spectrum at the same time.  It really is quite amazing that such contradicting emotions, such extreme opposites, can be present within us at the exact same time.

As you may have read in my last post, I recently ran a marathon!  Looking back it’s hard to believe I really did it, but I crossed the finish line, and I have a medal to prove it.  Now, it wasn’t a first place medal, but it says 26.2 just like the guy who finished first! :)

The whole experience was a bit surreal.  The training was grueling, but I learned a lot about myself.  The race was both exciting and exhausting, but I discovered that I have more in me than I realized.

The odd part was when it was all over, I felt a bit empty inside.  I felt like the “thing” that I had been focused on for so long was over, and I didn’t really know what to do with myself.  Spending hours running wasn’t on my “to do list,” and my goal was complete.  It was an odd feeling, a bit like having a relationship end.  I was in a relationship with running, but now we were broken up. :)

After race day was over and the high wore off, it wasn’t the physical act of running that I began to miss.  What I discovered was that I missed having a goal, feeling driven by a dream, getting inspired to accomplish what seemed impossible.

As 2013 was coming to an end, I realized that many of us had crossed multiple finish lines throughout the year.  Life asked us to trek across some pretty rough terrain, but we made it.

Now, it’s wonderful to bask in the glory of the success, but after some time has passed, we need to develop a new dream, a new goal, a new vision for the future.  The best part is that because of our recent finish line, we are able to develop better dreams, greater visions, more elaborate plans.  Our stage is widening, and the world is our platform.

The race has prepared you.  You are stronger now than you were before.  You’ve developed skills and strategies that you need for your next level and your next race.  Take some time to recover.  Then, get on up, because your NEW starting line is just around the corner!  Get excited, because the gun just went off.